The Land is Calling.

Can street art still punch through the politics?

Mohammed Ali’s latest mural ‘The Land is Calling’, now emblazoned over the side wall of a Brick Lane property, is arresting to the eye. The split-focus piece, framed by characters in Bengali script, depicts two figures – a boatman paddling the waterways and a woman working the fields of their homeland. They are two stylized re-workings of still frames taken from film footage shot by Ali whilst visiting his ancestral home of Sylhet in recent years, and they remind viewers of a motherland shared by many in the British Bangladeshi diaspora. 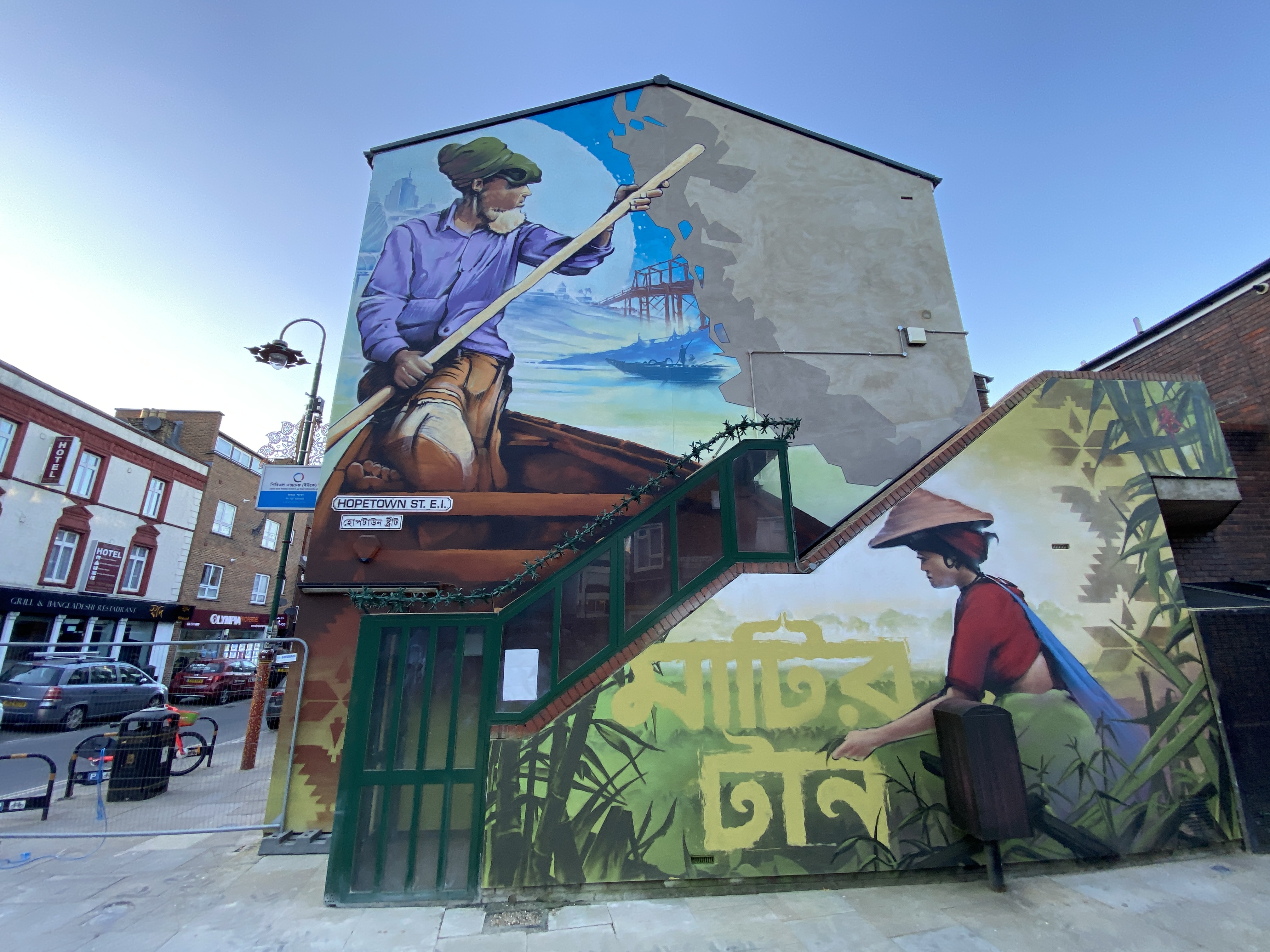 Writing in the Independent recently, East End activist Tasnima Uddin reported that the mural commission was conceived as a distraction: key members of the same local council that commissioned the mural during the summer of 2021 had (in parallel) voted in favour of a hugely controversial re-development of Brick Lane by corporate buyers. Uddin sees the mural and its artists as having been exploited, as unwitting accomplices in a process of so-called ‘art washing’, whereby street art both contributes to an economically driven and socially alienating process of gentrification and simultaneously deflects the public gaze form the sinister economics and politics beneath. She describes Ali’s mural as ‘beautiful’, but says little more about its provenance, its message or the possibility that this message might reach beyond the political framework she has set up.

Street art has traditionally shocked and provoked. It is true, though, that this artform has been commodified or ‘hipsterised’ in recent decades. It appears along carefully curated laneways and across inner-city walls in the globalised cities of the twenty-first century, often serving the tourist industry and speaking more of a manufactured municipal culture than it does of those communities who have lived in those city spaces for generations. Increasingly it is legally regulated and is now a far blunter tool for social commentary than it once was. In critiquing urban art, though, are we in danger of reducing art to the mere mirror of policy and politiciking? Can the art, in other words, not find a way of punching back through the politics?

In writing about the mural, I should clarify that I write from first hand experience. I've worked with Ali for some years on various projects, as these blogs testify. But what I write here is no mere tribalistic defence of his work, but an attempt to put a counter argument that seeks to defend urban art from being colonised simply by a different political view point. Ali is keenly aware of the political and economic landscapes upon which he works, often refusing commissions in which he feels his message and methods will be compromised, or continuing to paint more provocative murals that provoke draconian responses from local authorities – such as his ‘Black Lives Matter’ mural in Birmingham in 2020 that was, quite literally, whitewashed away.

Probably the crucial point here - and I know, as I've seen it happen - is the fact that Ali's work always grows from his strategic immersion in community, his careful collection of testimony and his ability to use diverse media, from murals, to movies and to museum exhibitions, to channel authentic stories and produce socially connected art. His renewed focus on Bangladesh has been in evidence for some years now and is a product of this way of working. Ali entered the world of street art as a self-identified ‘British Muslim’ artist some two decades ago, though has been through a personal and artistic journey. The deeply personal experience of bereavement, first the loss of his father then of his mother in 2021, refocussed Ali’s attention on the specifically Bangladeshi heritage he had never thought to delve into in his art until now.

There has been a sequence of work. First came his lovingly curated, multimedia exhibition ‘Knights of the Raj’, which ran in Birmingham Museum and Art Gallery in 2017 and was dedicated to the history of British curry trade. It illuminated the rich (and specifically Bangladeshi rather than generically Indian) legacy of the UK’s curry house pioneers. In Autumn 2021, as part of the Bangladesh 50 celebrations, Ali projected his ‘Bangladesh Tales’ films onto to the walls of London buildings, including the British Library, for diverse audiences to see. These chronicled and preserved the testimony of Bangladeshi elders whom he had interviewed as part of a collaboration with Bloomsbury Festival. That project, in turn, built upon an earlier collaboration, which had produced another mural, 'A few pounds in my pocket' on Cromer Street near Kings Cross, depicting the arrival of his father’s generation from Bangladesh.

The ‘Land is Calling’ is the latest, largest, and most permanent work in this cycle. It reflects Ali’s working methods and motivations: these are most raw of stories, the stories of migrant communities that can still grab public attention by taking over public spaces, placing art in the heart of community. Street art in its various forms has always polarized opinion, but why, then, have we seen such negative commentary in recent articles in the national press? The answer is that this commentary is actually driven by a laudable, sharp-eyed political activism that also feels the need to speak out and do better on the part of communities. And there is much in the criticisms raised: the politics under lying Ali's commission may indeed be murky and the mural can indeed be seen, as Uddin contends, as a kind of smokescreen to cover the hypocrisy of more questionable political projects of recent times.

Surely, though, we are not succumbing to some privileged, bourgeois notion of art, or being complicit in the crimes of late capitalism, just because we push to understand all the contexts that give rise to urban art - the processes that have led to its production, and the stories it tells? In so doing can we not preserve some notion of art’s power to speak back to ideological critique? This isn't a misty-eyed defence of l'art pour l'art, but an insistence on giving this art is fullest contextualisation. To reduce Ali’s latest work to something which is naively decorative and so easily co-opted is to rob his art of the force of social commentary that drives it, which it in turn drives, and for which it has become renowned. Councils and corporates aside, there is now a powerful record of Bengali cultural heritage on Brick Lane. All being well, it can outlive a council's incumbency - and we we may hold those councils accountable at the next election. The art, for now, remains, and though the artist never gets sole rights in interpreting their own work, neither do we commentators. And perhaps that is for the best.