New Chairs for the Classroom 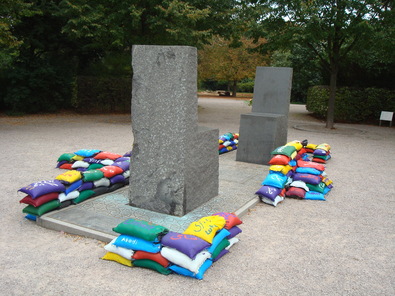 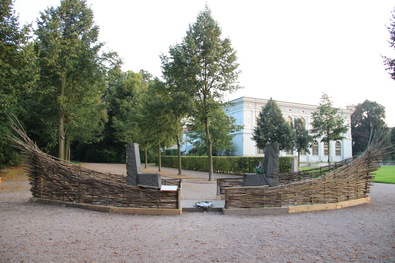 If you run an internet search on the Hafez-Goethe Monument - the Hafis-Goethe Denkmal - in Weimar, Germany, Google Images will present you with the usual wall of photographs of the two granite chairs that I have often written about here. Yet so many of the images reveal how the site has been added to or modified over the years: artists have contributed further layers of temporary installation, whether the woven raffia boat that bound the two chairs together as if on a common journey headed in some third direction, or the arrangement of cushions which made the chairs a site of multilateral community dialogue. Then there was the ‘Cultural Sounds’ installation of 2015 by Martin Recker and Paul Hauptmeier, two students of Weimar’s Franz Liszt University of Music. Theirs was an immersive montage of recordings from Germany and Iran, set over an ambient soundscape and played to audiences live at the monument (listen here). The piece initially presented sound components (recordings of the adhan, the Muslim call to prayer, and the sound of traffic in a modern city) only to disconnect them from the Eastern and Western contexts with which many listeners would tend to associate them, by shifting their physical position in the listening space. By the end, all the sounds could equally be from ‘everywhere,’ and in realizing this the audience were meant to become aware of the limitations of their own cultural preconceptions as they realized this. This is all highly creative and powerful stuff and marks a worthy tradition of attempting to take so-called ‘high’ culture into the city and to the general public. I love this kind of work and it speaks to me on many levels. But let’s face it, I am a white, male academic with artistic inclinations - it's going to reach me.

I believe we need to ask searching questions here. Whom do these so-called outreach activities actually reach? How diverse is the public that comes to see, to listen and to talk at sites such as monument and at events like those I describe above? How reflective of a socially, politically, ethnically complex society are these groups? Are they like me? Often they are very much like me, so when I think this through truisms about ‘preaching to the converted’ and speaking in ‘echo chambers’ come to mind. And, ultimately, what kind of effect do these events really have anyway? I am engaged in taking my research as far as it will meaningfully go beyond academia, to have an impact on as diverse a set of publics as is willing to engage with it, and with me. I am interested, too, in evaluating how best to do this and in asking how effective (or ineffective) different approaches are for different audiences. This has not led me to devalue in any way the approaches to engagement described above – far from it. I have, though, had to think about how I can engage and how, if at all, I can influence the way people less like me think and feel. 2016-17 has seen me pursue my ideas down new corridors, and think critically about my successes and failures.

As ever, new corridors require me to return to and re-think my material. I have been trying to distil the essential messages I take from my research, from Goethe’s work and from the monument. Reflecting Goethe’s vision, the chairs imply a meeting of two distinct faiths, though the common material from which both chairs are cut (the very same stone) also implies an underlying commonality connecting the cultures. The key point is that these connections do not overwrite all differences: the chairs allow us to be different and yet connected all at once. The seems to be an essential insight for anyone working in a multi-cultural environment – and nowhere can this be more useful than in education sector. Given last year's Stern review, which emphasised how the impact of research could be measured in terms of its influence on curriculum, the most recent phase of the project has focussed on trying to take this message into schools and add value both inside and outside the curriculum.

You might think the natural territory for my project would be Modern Foreign Languages, and German in particular. This was in part true. A short presentation on the story of Goethe, Hafez and a few moments unpacking the ideas tied up in the monument proved to be a fascinating way of getting Year 13 ‘A’ level students from Longsands Academy, Cambridgeshire, to think critically about the possibility of identities that cut across perceived cultural boundaries. This helped them get a handle on that issue as it played out (as a point of conflict) for the German-Turkish characters of the film Almanya – Willkommen in Deutschland (2011). It was also a useful way of tapping into a more optimistic German vision of the possibility of intercultural identities; pupils reflected on the relevance of this for Germany today in essay and oral work generated by the ‘Multiculturalism’ module on the AQA ‘A’ Level German syllabus.

Under the guidance of their teachers, Laura Fengler and Steffi Schmiedel, Year 12 students at Longsands, together with a group of Klasse 12. counterparts at their exchange school, the Inda Gymnasium, Aachen, used the Two Chairs idea as a thematic impulse and conceptual guide for reflecting on the position and integration of immigrant communities in contemporary Britain and Germany. Their discussions ran via video conferencing and email, with students discussing notions of mixed identity and how this impacted different models of ‘belonging’ and the idea of the cultural and social ‘hospitality’ offered by majority cultures. They presented the discussions these in writing as dialogues in German and English, enhancing each other’s linguistic skills and knowledge bases, and building relationships in the process. GCSE pupils, confronted with that overworked task of describing themselves and each other, found that topic enhanced by a presentation on cultural differences and similarities generated by the Two Chairs story. This provided an opportunity to introduce new comparative linguistic structures (‘Wir sind uns verschieden/ ähnlich …’) and gave them the courage to write about cultural differences – a topic they had felt to be too fraught to write about – and to do so with more sophistication than the rather binary approach implied by the GCSE syllabus.

The power of the Two Chairs image has proven to be the iconic and memorable way to reflect on cultural complexity across different subjects, too. Once pupils have seen a presentation, and have been given appropriate degrees of historical context, the image functions as a kind of meme, reflecting a more layered way of thinking about cultural identity – one that can be revisited and reactivated in multiple school contexts. I developed this way of working with Cecilia Townley, Head of Religious Studies (RS) at St Catherine’s School in Bramley, Surrey. The AQA GCSE syllabus on Christianity and Islam aims for the accrual of knowledge of the two faiths, but, moreover, promotes a sophisticated, comparative reflection upon the similarities and differences between the two religions, and seeks to free pupils of one-sided value judgements and normative thinking. In particular, pupils need to write extended, considered responses on how the two faiths converge and diverge on key ethical issues - these are the notorious 12-mark answers to be found on exam papers. Cecilia and I identified this new aspect of assessment as an area in which both secondary teachers and pupils needed support, but also as an opportunity for Two Chairs thinking. We planned a sequence of lessons, which she tried out in her school, which we ran as part of an ‘on campus’ away day for GCSE groups from various schools, and which we later formalized as a mini scheme of work that could downloaded and used, in part or in full, by RS teachers all across the UK. The lessons touched on key and often difficult themes – the institution of marriage, same-sex relationships, attitudes to war and violence – and sought to get pupils to write critically, comparatively and without normative thinking about what the two faiths taught on these issues. We ran a small competition and awarded to prizes to those students who showed most evidence of Two Chairs thinking in their work. 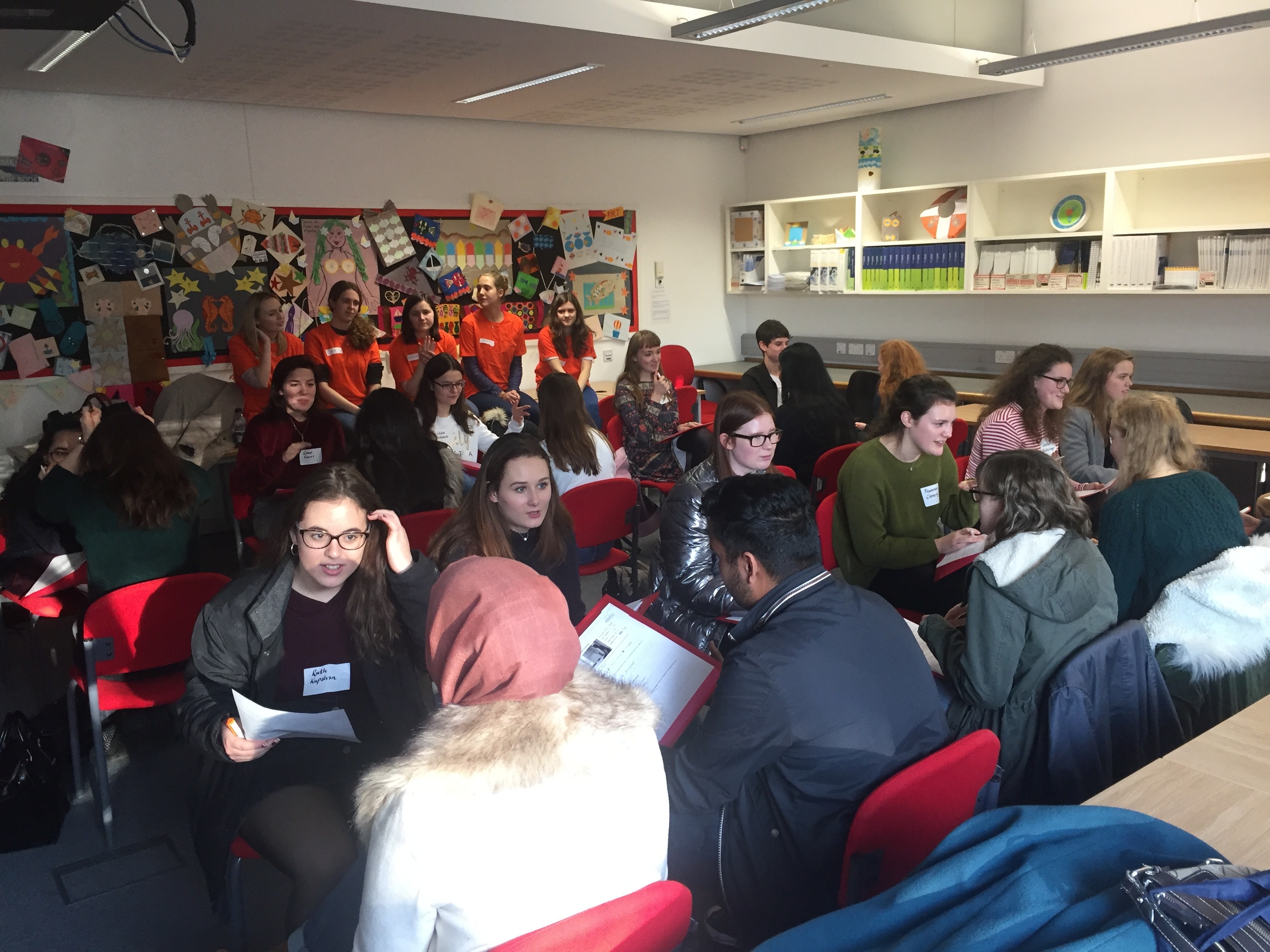 Adding to the curriculum on campus

Across all of these activities, I’ve sought to engage different kinds of schools and to get them to engage with each other. Longsands is an Academy, an 11-18 mixed ability school that ended up working academically with a German school. St Catherine’s is an Independent girls school in leafy Surrey, which operates within a very different social and cultural demographic to Lyng Hall School, a trust-school local to Warwick University in Coventry. Pupils from the latter two schools attended the RS open day and had students write and submit essays, and win prizes, for Two Chairs style thinking and writing. So the project has begun to engage with greater diversity, and also to cross and extend the school curriculum. It has also fed into the extra-curricular domain. The Pulse Drama group from St Catherine’s responded to my presentation on the Two Chairs story by way of a drama project that took the simple idea of two (physical) chairs as on stage props, and elaborated from this a string of scenes covering issues such as gender, relationships, race, immigration. Writing through improvisation workshops, led by Sally Gallis, Head of Drama, they played with lights, sound, body position and posture and scripted dialogue to explore communication and its breakdown, empathy and its absence and intercultural encounters in a piece of theatre that was taken and performed at this year’s Edinburgh Fringe Festival (watch here) – one reviewer tweeted that this was “Compelling & profound,” and felt the audience’s assumptions about today had been tested by this "impressive group of young female actors.”

Throughout, whether in the form of an essay, a short written answer, a thought spoken aloud in class, or a cutting-edge piece of theatre performed at a world-renowned arts festival, the pupils’ work itself forms an archive of evidence. As I have worked with schools, I have collected, recorded, and filmed the pupils’ work, but also asked pupils and their teachers to comment on the process and the value of my input for their work and thinking. A portfolio of evidence comprising my writing, pitches and presentations, and also written work and spoken testimonials from my audiences, audio and video footage from events, has continued to grow. So as the Two Chairs idea morphs, as new chairs are made, and as the activities generated by them proliferate, so the evidence base diversifies. This year has shown me that if we, as academics, remain open to re-thinking and reworking our approach, whilst staying true to our core message, we can feel safe in letting our work go and allowing it take on new life in the hands of others. We will get to tick many of our ‘impact’ boxes, but the outcomes and the benefits are often things we might never have envisaged, and which will extend us as much they do our audiences.

Reaching far beyond school, the Pulse group at the Edinburgh Fringe. 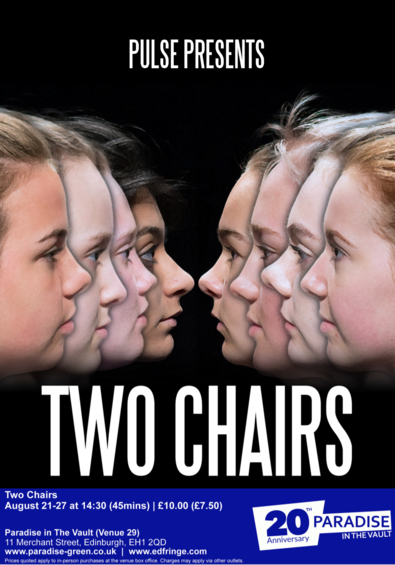