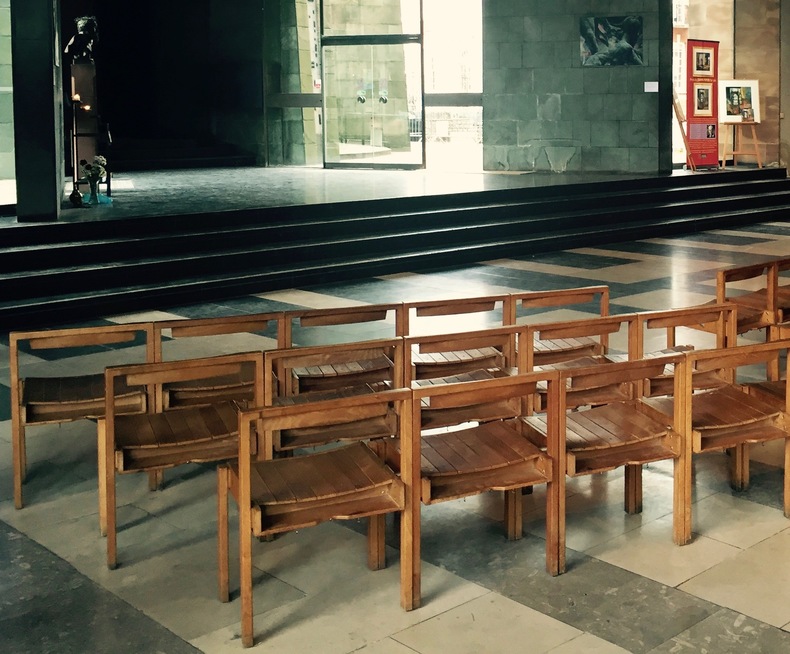 I’ve been thinking a lot about chairs recently. No, I’ve not been drooling over IKEA’s latest designs, and nor am I getting down with the urban middle classes by up-cycling discarded chairs from thrift stores to give my house that shabby-chic look. Anyone who’s been following this blog will know the growing importance to my work of the iconic Hafis monument in Weimar, Germany – a striking sculpture comprising two huge granite chairs, mutually distinct yet cut from the same block of stone. It represents figuratively the fictitious meeting that the German poet Johann Wolfgang von Goethe imagined between himself and Hafis of Shiraz, the twelfth century Persian poet, and described in his Divan of German-Oriental poetry. It seemed to me carry a powerful message about how we can build relationships with those we perceive to be our 'others', finding common ground with them whilst acknowledging the importance of our mutually distinct beliefs, and provides a palpable way for getting those ideas across to people not steeped in the lofty philosophical discourses of nineteenth century German culture. And in thinking that I was, on one level, on to something.

But chairs have also figured differently in my work in recent times. I’ve also spent a lot of time physically moving them around public spaces and meeting rooms – school classrooms, church halls, even the nave of a cathedral. Typically, I would have arrived early, keen and eager, to a meeting I’d arranged with the staff of a school, an interfaith forum, clergy, the elders of a mosque, or colleagues working in local government, and the aim was to talk about how my research might inform and drive a collaborative project of some sort. I don’t think of myself as elitist, but I did often think on such occasions that I should be gathering momentous thoughts, rather than setting up the furniture, talking to people about room layouts and how they might impact upon how I ‘came across’ when presenting. One rainy night in January in Surrey, however, in a cold church hall with the ancient gas heaters creaking into life, what should have been a rather obvious penny dropped: how I came across was, in fact, vital. I was in Woking talking to the Woking People of Faith group people about Islam in German history. I didn’t need momentous thoughts. I needed to talk to them about my work in a way that appealed to and was useful to them and their cause, which was about promoting lived interfaith experiences for diverse communities. As I spoke to my audience it was clear that they were interested enough in the historical background I was sketching out, but also that they were more interested in how the images such as that of the Two Chairs, and the ideas it brought with it, might form the basis of themed events and social activities. So, part way through my presentation I changed tack and started thinking about how the core ideas of my work might translate into very different kinds of activities and projects: in other words non-academic outcomes springing from academic work. And that has proven to be a turning point in my public-facing work.

It’s not that I have abandoned anything resembling the traditional academic modes of delivering research beyond campus. On the contrary. This past week, for instance, I gave a free public lecture in Coventry Cathedral to an audience comprising some academics, but also members of interfaith groups, teachers of religious education, and the interested general public. Moving through examples from German history from the 1770’s through to the First World War, I talked around themes such as perceived differences between German and Islamic culture, though also looked at a range of cultural products, including travel writing, postcards, scholarship and literature, and examined how they sought to establish connections and similarities between the cultures in areas such as belief and doctrine, but also in terms of shared values and political goals. That pattern of similarity, we saw, played out in all kinds of progressive, enlightened, though also more sinister ways. I was fortunate enough to have as my respondent Dr. Abdullah Sahin, who has recently been appointed as Reader in Islamic Education at Warwick University. He drew out some of my themes and spoke about their relevance for the UK today. 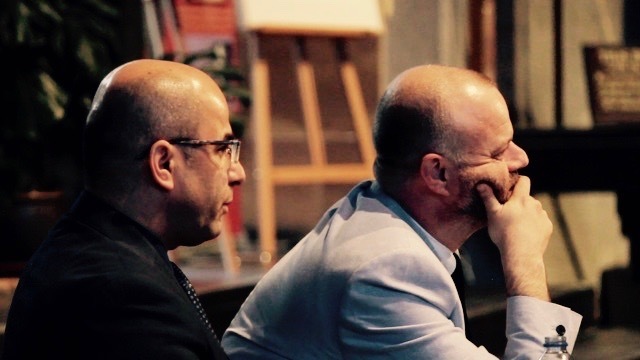 Although the lecture was pitched at a non-specialist audience, and the response specifically designed to connect historical ideas to the present, the format of the evening with its Q&A session and concluding discussion was pretty much in line with the format of most academic research events. And, of course, there’s nothing wrong with this. However, it’s both possible and necessary to do things differently when approaching different audiences.

Recently, at St. Catherine’s School near Guildford, working with the Head of RE, Cecilia Townley, I pitched my idea for the Two Chairs exchange to a range of pupils and staff from various subject area. Drawing on the potential I’d sensed that rainy night in Woking, I presented the image of the Two Chairs as a model for staging all kinds of encounters, between pupils at different schools, between UK pupils and their German exchange partners, or between pupils of differing faiths. Such encounters could be face-to-face, online or virtual. The sentiment of the Two Chairs, in essence, is to encourage encounters between participants who might appear at first glance to be mutually different, and to get them not to overcome their differences entirely but to explore how and in what ways they also share values, traditions and insights and find ways in which they can collaborate on creative projects. The key insight given to participants is that dialogue alone is not enough to achieve this - or at least dialogue in which two agents merely speak and listen. Such encounters can do as much to entrench differences, as they do to look beyond them. Empathy and imagination are required, and the aim is to imagine oneself in the position of the 'other', exchanging roles, as well as words and opinions. The question of how it might feel for us to be the ‘other,’ of where differences and similarities lie when viewed from both perspectives, will drive a range of activities at St. Catherine's, curricular and extra-curricular, involving drama, dance, fine art, modern languages and, we hope, produce a range of outcomes in the form of text, image and performance that can be displayed publicly and online, and will enrich the experiences of pupils and staff. That model will roll out to different schools, build links between schools and help span all kinds of divides, real and imagined.

For me the key insight has been that we need to be prepared to reinvent our material and rethink our approach to reach diverse publics. This involves listening, discerning, considering and mapping our work onto the needs of your audiences, and offering them events and activities that are meaningful to them. It might sound obvious, yet often academics can get caught up in ideas of their own unquestionable legitimacy, ongoing relevance and universal appeal. Of course, we will continue to set the highest standards and to publish by those. Yet we must also do more. Admittedly, your public-facing work will look very different to the printed pages of a journal, and some colleagues will cry banality, arguing that you’ve diluted your work or lost it entirely through such radical re-contextualization. But therein lies the art of this kind of project: distilling a clear message that is recognizably part of your published research, putting that message at the heart of a project and producing a range of outcomes, all of which are demonstrably inspired by your input - that’s become key to what I’m trying to do. So as National Refugee Week approaches, 20-26 June 2016, and I prepare to find ways in which the Two Chairs project can become a model to get school children to engage with immigrant communities in a number of locations around the UK, or be used to stage icebreaker activity at various social events, I’ll more than likely find myself moving chairs around halls again. This time, though, it will be with the realization that this isn’t something divorced from my research. It’s a meaningful part of a new way of working.