Drinking Deshi Chai in the UK.

The Complex Flavours and Unheard Stories of Sylhet.

It’s another one of those cool days that pass for summer in the UK. The sky is overcast with lead-grey cloud. On such days, I’ve grown accustomed to dropping in at Cha and Nasta a café in my adopted hometown of St Albans, to add some warming spice to my day with a cup of deshi chai, chat with the proprietors, whom I have known for a number of years, and drop off some laundry at the dry cleaners next door. Those two businesses are intimately connected, having supported each other through the pandemic and, in fact, belong to the same British-Bangladeshi family. Yet these two shops tell more than just a feel-good, local interest story. In the year in which Bangladesh celebrates the 50th anniversary of its independence, this family’s story speaks of the social complexities and the cultural richness of the Bangladeshi diaspora in the UK, of the struggles they have faced within our society, and of the huge contributions they have made to it. And it offers us, too, some timely reminders on avoiding simplistic, stereotypical thinking about those communities and cultures we think we know.

Laundry Express had been a pivotal community business in St Albans. Yet as COVID-19 forced us all to ‘pivot’ elsewhere, re-discovering the joy of doing for ourselves those things we had learned to outsource to others, the business came under pressure: let’s face it, when you’re working from home in t-shirts and tracksuit bottoms, there just aren’t as many shirts to iron. Co-owners Abdul Khan and his sister Sam had already taken on the shop unit adjacent to the laundry and opened a moderately successful, mainstream coffee shop. There are, though, more coffee shops than there are pubs in St Albans these days – and St Albans is already bristling with pubs. Competition, then, was stiff. The Hideout Kafé, as it was called back then, did well enough, but as the pandemic bit, it was not offering the mutual lift that the laundry business needed. A solution was desperately needed.

Abdul, Sam and family made a key decision. They remodelled the café to serve Bangladeshi street food, the kind of food they loved to eat, were best at cooking and, perhaps most crucially for them, spoke proudly of their heritage, recalling memories of childhood dishes cooked by their mother. Pursuing Sam's vision, they repainted the cafe, rebranded, kick-started an aspirational, in-house marketing campaign – and turned both businesses around in the process. Now both the building and the printed menus glow with the same warm mustard colour, the name (meaning ‘tea and snacks’ in Bangla) is proudly emblazoned in Bangladeshi influenced font within the logo, and the business’s Instagram account is filled with pictures that radiate the gentle spics and warm flavours of distinctively Bengali food. They even have a restored, branded rickshaw out back to take samples of their wares out and about on market days in town – and this sits next to their newly installed, heated courtyard room. People come especially from North London suburbs to visit and to eat. 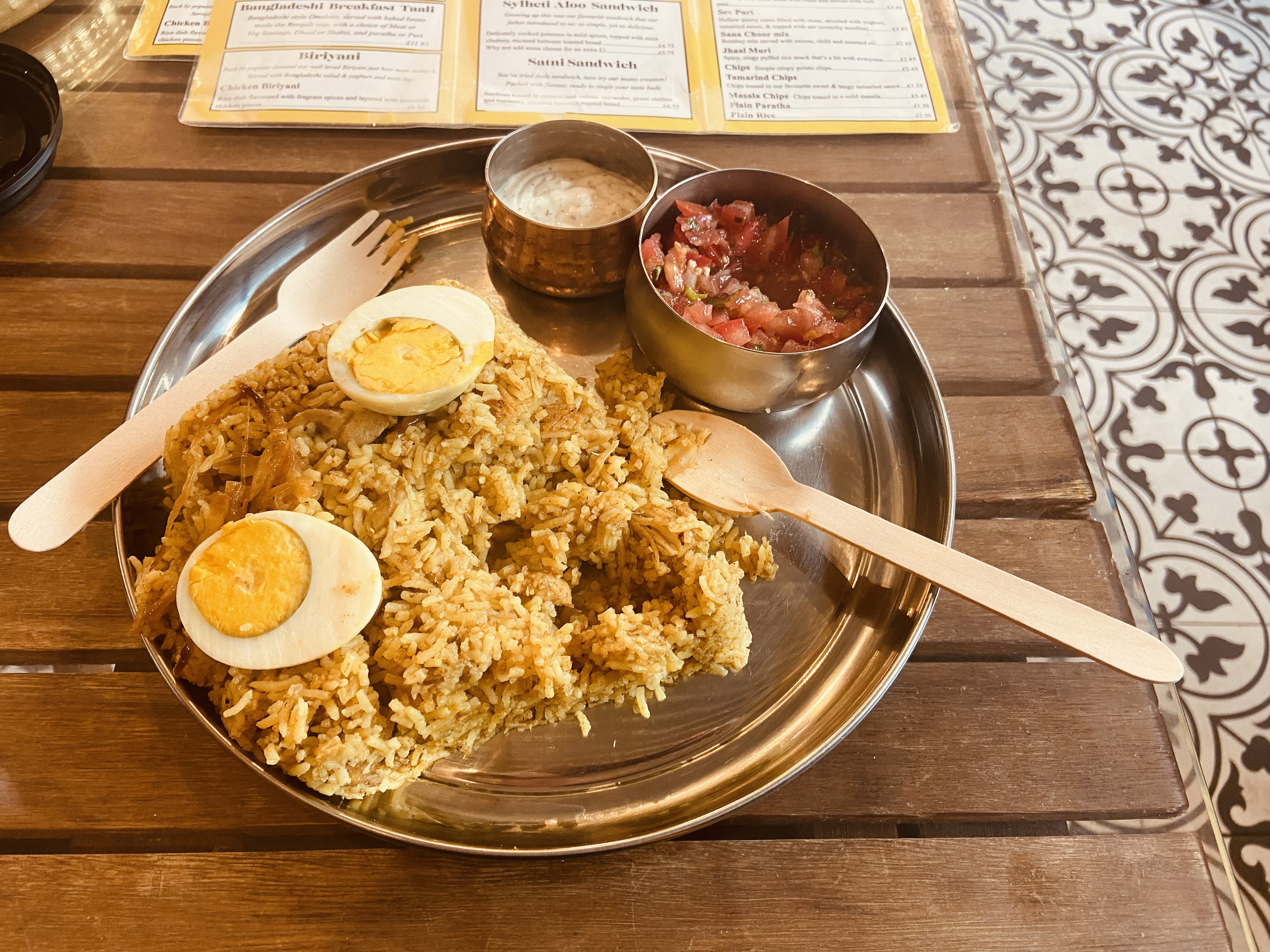 All the food is cooked freshly, at home by the family, and is brought in the same day to serve. Fronting the shop is Bushra, Abdul's wife, assisted by their daughters, nieces and Sam, too. Today I don’t dash in and out, but sit and treat myself to lunch. I ponder the menu, photograph it and text the image to that other influential Bangladeshi in my life – my friend and collaborator, Birmingham-base artist Mohammed Ali MBE. I ask for recommendations. With a background in the restaurant trade, and as curator of the famous ‘Knights of the Raj’ exhibition at Birmingham Museum and Art Gallery, which documented the untold story of the early Bangladeshi curry trade in the city, Mohammed knows his stuff. He pounces on the Satni Sandwhich, the sardine sandwiches. It unlocks memories for him of his mother, Rukeya Begum, who passed away earlier this year and who would make these for the family at home in Birmingham. As I speak to Bushra, she tells a similar story of her memories of childhood food. As she serves her customers, she tells the stories, where the food cane from and what it means to the family. She, Abdul and Sam, are rightly proud. Her customers, in turn, share their life stories and experiences. This is more than just a café. It is a hub for cultural exchange. 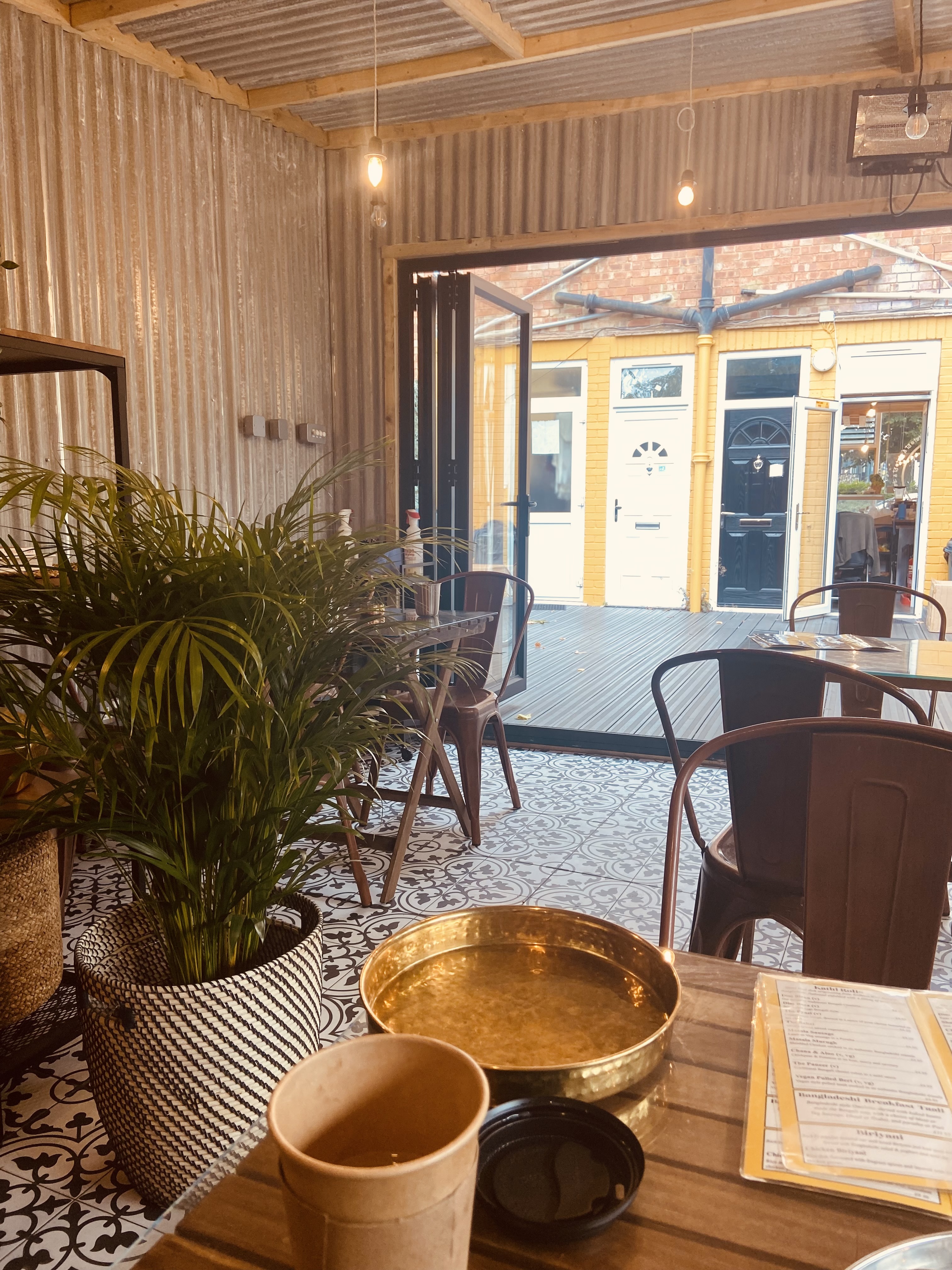 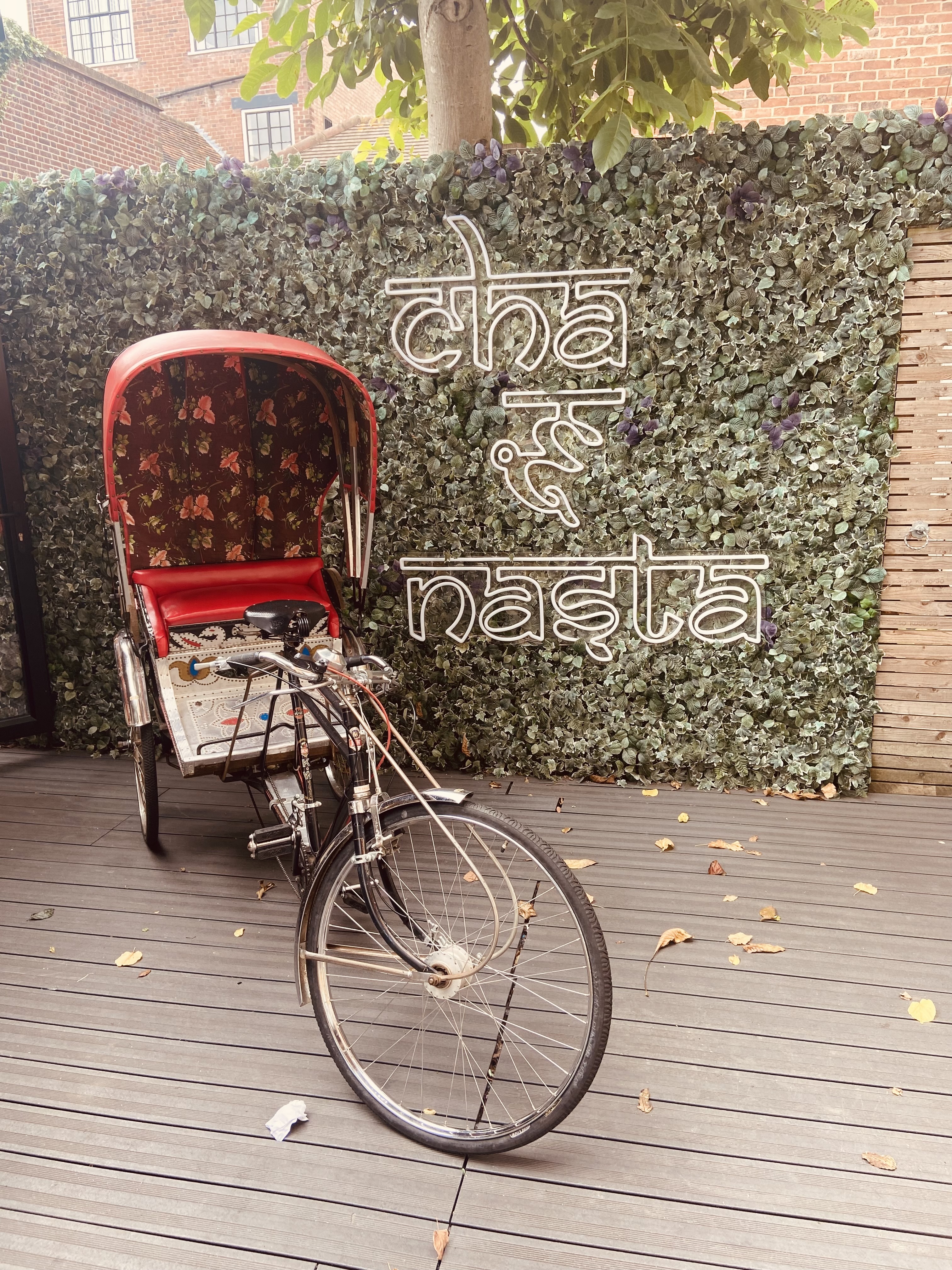 The stories this place and this food unlock are not just emotional, but also deeply informative. Like Mohammed Ali's family, the Khans don’t hail from the big urban centres like Dhaka, but from the north-eastern city of Sylhet, and more specifically from the surrounding region and the villages that sit along the River Surma. These sardine sandwiches are specifically Sylheti, recalling a snack eaten by boatmen working on the river, or children coming home from school or shoppers in a bustling street market. Yet they add another layer to the story – they are made from British canned sardines perched between toasted bread, though they have had chilli and coriander added to them to recreate the flavours of home. In this way, they tell the story of how, over time, Bangladeshi immigrants adapted local, UK ingredients and idioms to recreate the taste of home, with a local twist. This is hybrid food, which tells a story of journey, of transformation, and of generational change. Every layer of flavour is, in effect, a layer of added meaning, memory and nuance. In complex, multi-cultural societies, where countless cultures jostle for space, rights, recognition and representation, nuances like this can easily get lost.

As we gear up to mark ‘Bangladesh 50’, large scale cultural programmes and events are rolling out in our big cities. East London, in particular Brick Lane and Tower Hamlets area generally, is rightly to be a focal point of the celebrations: these places formed the hearts of Bangladeshi communities in the UK. Yet, just as Bangladesh is not only Dhaka, so the UK is not only London. The story of Muslim Sylheti families constitutes a further distinctive strand in the cultural tapestry woven by British Bangladeshis. It deserves its own special time and place. Similarly, the Khans, their cafe, their food and their story, nestled perhaps incongruously in the heart of a small, gentrified, ancient English city, should not only receive the patronage but also the attention of our diverse society. If we give them that attention, it seems, then the lovingly crafted details of their food, and the stories it tells, will not be lost to us amidst in the noise of bigger celebrations. 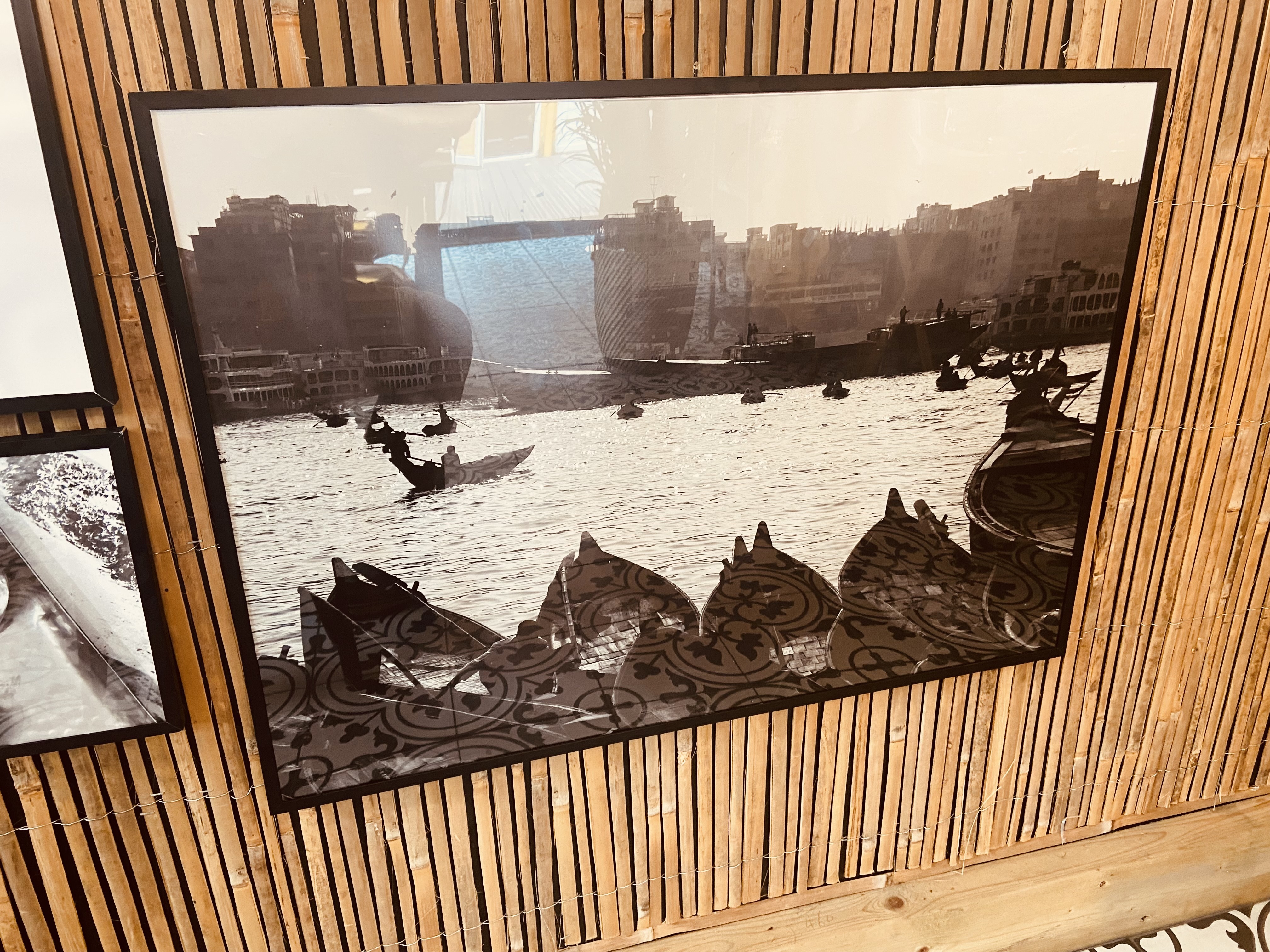